Reminder for Call for Papers

We wish to remind you that the deadline for the submission of contributions for the first issue of the International Journal of Cooperative Law expires on the 31st of August. For more information please visit https://iuscooperativum.org/call-for-papers/

Looking forward to receiving your contributions.

The focus of the journal is cooperative law, broadly defined as all those legal rules which regulate the structure and/or the operations of cooperatives as enterprises in the economic sense and as institutions in the legal sense, including provisions from other areas of law, applied to cooperatives.

The journal’s establishment and development aspires to contribute to fill the knowledge and research gap, while constituting the venue to establish cooperative legal theory in the discipline of law. To promote its goals, the IJCL will be an open access, online journal and its issues will be published at www.iuscooperativum.org in order to reach the highest possible number of readers.

Authors that are interested in contributing to the IJCL’s first issue – to be published at the end of 2017 – are invited to submit their work at [email protected]um.org  before the 31th of August.

The editors will consider articles, book reviews, event reports, commentaries on court cases and contributions on legislation that are of significance for a wider audience on topics related to national, regional or international cooperative law, including global and comparative perspectives.

The editors are also interested in publishing manuscripts on labor law, tax law, competition law and other areas of law that have an impact on the cooperatives’ structure and operation.

Contributions that have been previously published elsewhere in other forms or/and languages may also be submitted at the IJCL, under the condition that there will be no copyrights’ infringements.

Please use the following example for your manuscript’s citations:

The contributions will be subject to an anonymous peer-reviewing process, during which the article will be evaluated and a decision will be made for the article’s acceptance, revision or rejection.

UAAM-VVOV, Lieve Lowet, partner at ICODA European Affairs and AMICE, are jointly sponsoring and promoting The European Mutual Insurance Award, which aims to encourage research and analysis in the field of mutual insurance legislation in Europe.

Report of the 1st International Forum of Cooperative Law

First surprise for a European man or woman: we were not less than 140 attenders and a quick survey by show of hands indicated that most of them were lawyers. Moreover, profile were diverse: Professors, young researchers, councils, employees of cooperatives, civil servants, and all coming from different countries of Latin America, Canada, Israel and Europe. Nearly everybody attended or made a presentation to all the sessions, both of the Latin America Congress and of the International Forum. The number of young law researchers and lawyers was very promising for the development of cooperative law.

The concomitance of both events was very fruitful for two reasons. First, with regard to organization, this allowed to mutualize efforts and to profit from the presence of LatinAmerican lawyers, far more numerous. Concerning funding, there was few mutualization but a high generosity from ICA America and CUDECOOP (the Uruguayan co-operative confederation), who provided freely for the premises, the interpretation Spanish-English-English-Spanish during all three days, and offered low fees for enrollment. Such arrangements are often the outcome of personal relationships, and the friendship of Hagen Henry (Chair of the Law Committee of the ICA) and Dante Cracogna (Chair of the regional Law Committee of ICA America) is the basis of that success. The Europeans in Montevideo have had the dream that European cooperatives could share that attention for research.

The second benefit from the collaboration was intellectual. Instead of having two successive or parallel events, one American and one worldwide, the diverse sessions were mixed or joint. The outcome was very fruitful: the opportunity for everyone to learn more about research on LatinAmerican and international cooperative law, and the possibility to debate. The whole has been very stimulating, but also very friendly.

It would be too long to develop all the aspects of the conference, click here to access the full programme (http://ica.coop/en/events/1st-international-forum-co-operative-law).

In our understanding, the cooperative act is the act which qualifies the relationship between the cooperative and each cooperator. It seems to be nearly exactly the opposite of the double quality principle developed in Europe. Indeed, instead of presenting two different qualities, two relationships, (as a shareholder and as a user of the cooperative’s services), the cooperative act provides for a synthesis of these two sides of the coin. The cooperator is not schizophrenic, he/she is a member for whom the political involvement and the use of cooperative’s services are the outcomes of a single quality: membership. This concept may be an answer to the problems created by the notion of double quality. Indeed, the double quality principle allows the attraction of the use relationship by a separate contract, which is itself attracted by the various contracts of traditional typology: labor contract, loan, sell…

The second interesting topic of the conference has been the control of cooperatives, considered as mix of cooperative auditing and state control. It seems that the use of cooperatives by public policies was present in all the minds, and made people reluctant to any state intervention. The situation differs from a state to another, the state is sometimes still the auditor itself. The hostility against the situation is so high that some lawyers contest the principle of external auditing itself, considering that the legitimate control must be made by members. However, most speakers defended auditing, at least with the condition that it is finally, even if indirectly, under the responsibility of the cooperative.

About non LatinAmerican lawyers, far less numerous, most of their presentations have been, directly or indirectly, centered on cooperative principles and their connection with cooperative law, notably through constitutional provisions, in a comparative perspective. Aside, another topic has been the relationships between cooperative law and competition law or tax law. In the detail however, the contributions were disparate, because of the various culture of the speakers. This is also the fruitfulness of such events, but it shows that the community of cooperative lawyers will profit from a stronger structuration.

Apart from the communications, two major concrete initiatives have been presented, aimed at the creation of technical tools to facilitate research in cooperative law. In one hand, ICA prepares a database of cooperative legislations. This project is ongoing, with International LaborOrganization and FAO as partners, and the possible support of the World Bank. Its structure and functionality remain vague (notably its updating), but very promising. A beta version will be online soon, with 40 countries integrated. In a medium run, it should be more than a static database, and would stimulate debates.

To sum up our feeling after these three days in Montevideo, we have been impressed by the number of lawyers attending, with attention, and by the variety of the covered topics. That diversity derives from the multiple understanding of what is cooperative law, lato sensu, in connection with the traditional branches of law. The event has been closed by Hagen Henry and a closing conference of Dante Cracogna to synthesize the discussions. They both echoed the opinions expressed during the conference that such events should be organized more regularly. Would that wish be heared by european cooperatives?

Cynthia and Ian, welcome aboard!

The title of the conference is ‘Developing Inclusive, Collaborative and Responsible Businesses: Co-operatives in Theory, Policy and Practice’.

Co-operative enterprise law is only rarely part of teaching curricula, even if about one billion members around the world are involved in this special form of enterprise with an economic and social impact to match. The repeated crisis resilience of co-operatives and the growing awareness that sustainable development issues must also be addressed by and through enterprises bring this shortcoming to light. The issue is tackled by international governmental instruments and by the International Cooperative Alliance Blueprint for the Cooperative Decade 2011–2020.

This course is to create an understanding of the factors which shape co-operative law. The term “co-operative law” also incorporates other fields of law as they impact on the structure and operations of co-operatives, such as labour law, tax law, competition law and accounting and bookkeeping standards, as well as law making and implementation procedures. As students come from different national backgrounds, reference to specific co-operative laws will only be made by way of example.

At the end of the course the students will be able to distinguish the co-operative form of enterprise from other forms, especially from the stock company, in terms of its legal structure. This includes co-operative management and governance, the nature and structure of its capital and its control mechanisms.

The students will learn about developments that shape co-operative laws, not least as co-operatives take new forms under globalisation. These complex developments include a general trend to harmonise law; the emergence of international regulations which directly impact on enterprises; regional co-operative legislation and regional model laws.

For more information about the content of the Forum and to express your interest in attending as a participant and/or a speaker, please download the call for expression of interest below. Expressions of interest must be received by 1st September 2016. 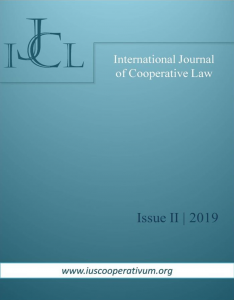 Our second issue is out now! You can download it here. You can get previous issues here.