Report of the 1st International Forum of Cooperative Law

First surprise for a European man or woman: we were not less than 140 attenders and a quick survey by show of hands indicated that most of them were lawyers. Moreover, profile were diverse: Professors, young researchers, councils, employees of cooperatives, civil servants, and all coming from different countries of Latin America, Canada, Israel and Europe. Nearly everybody attended or made a presentation to all the sessions, both of the Latin America Congress and of the International Forum. The number of young law researchers and lawyers was very promising for the development of cooperative law.

The concomitance of both events was very fruitful for two reasons. First, with regard to organization, this allowed to mutualize efforts and to profit from the presence of LatinAmerican lawyers, far more numerous. Concerning funding, there was few mutualization but a high generosity from ICA America and CUDECOOP (the Uruguayan co-operative confederation), who provided freely for the premises, the interpretation Spanish-English-English-Spanish during all three days, and offered low fees for enrollment. Such arrangements are often the outcome of personal relationships, and the friendship of Hagen Henry (Chair of the Law Committee of the ICA) and Dante Cracogna (Chair of the regional Law Committee of ICA America) is the basis of that success. The Europeans in Montevideo have had the dream that European cooperatives could share that attention for research.

The second benefit from the collaboration was intellectual. Instead of having two successive or parallel events, one American and one worldwide, the diverse sessions were mixed or joint. The outcome was very fruitful: the opportunity for everyone to learn more about research on LatinAmerican and international cooperative law, and the possibility to debate. The whole has been very stimulating, but also very friendly.

It would be too long to develop all the aspects of the conference, click here to access the full programme (http://ica.coop/en/events/1st-international-forum-co-operative-law).

In our understanding, the cooperative act is the act which qualifies the relationship between the cooperative and each cooperator. It seems to be nearly exactly the opposite of the double quality principle developed in Europe. Indeed, instead of presenting two different qualities, two relationships, (as a shareholder and as a user of the cooperative’s services), the cooperative act provides for a synthesis of these two sides of the coin. The cooperator is not schizophrenic, he/she is a member for whom the political involvement and the use of cooperative’s services are the outcomes of a single quality: membership. This concept may be an answer to the problems created by the notion of double quality. Indeed, the double quality principle allows the attraction of the use relationship by a separate contract, which is itself attracted by the various contracts of traditional typology: labor contract, loan, sell…

The second interesting topic of the conference has been the control of cooperatives, considered as mix of cooperative auditing and state control. It seems that the use of cooperatives by public policies was present in all the minds, and made people reluctant to any state intervention. The situation differs from a state to another, the state is sometimes still the auditor itself. The hostility against the situation is so high that some lawyers contest the principle of external auditing itself, considering that the legitimate control must be made by members. However, most speakers defended auditing, at least with the condition that it is finally, even if indirectly, under the responsibility of the cooperative.

About non LatinAmerican lawyers, far less numerous, most of their presentations have been, directly or indirectly, centered on cooperative principles and their connection with cooperative law, notably through constitutional provisions, in a comparative perspective. Aside, another topic has been the relationships between cooperative law and competition law or tax law. In the detail however, the contributions were disparate, because of the various culture of the speakers. This is also the fruitfulness of such events, but it shows that the community of cooperative lawyers will profit from a stronger structuration.

Apart from the communications, two major concrete initiatives have been presented, aimed at the creation of technical tools to facilitate research in cooperative law. In one hand, ICA prepares a database of cooperative legislations. This project is ongoing, with International LaborOrganization and FAO as partners, and the possible support of the World Bank. Its structure and functionality remain vague (notably its updating), but very promising. A beta version will be online soon, with 40 countries integrated. In a medium run, it should be more than a static database, and would stimulate debates.

To sum up our feeling after these three days in Montevideo, we have been impressed by the number of lawyers attending, with attention, and by the variety of the covered topics. That diversity derives from the multiple understanding of what is cooperative law, lato sensu, in connection with the traditional branches of law. The event has been closed by Hagen Henry and a closing conference of Dante Cracogna to synthesize the discussions. They both echoed the opinions expressed during the conference that such events should be organized more regularly. Would that wish be heared by european cooperatives? 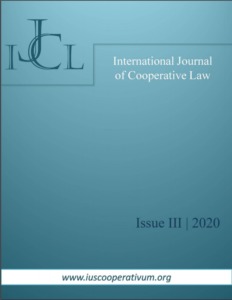 Our third issue is out now! You can download it here, or check our previous issues.